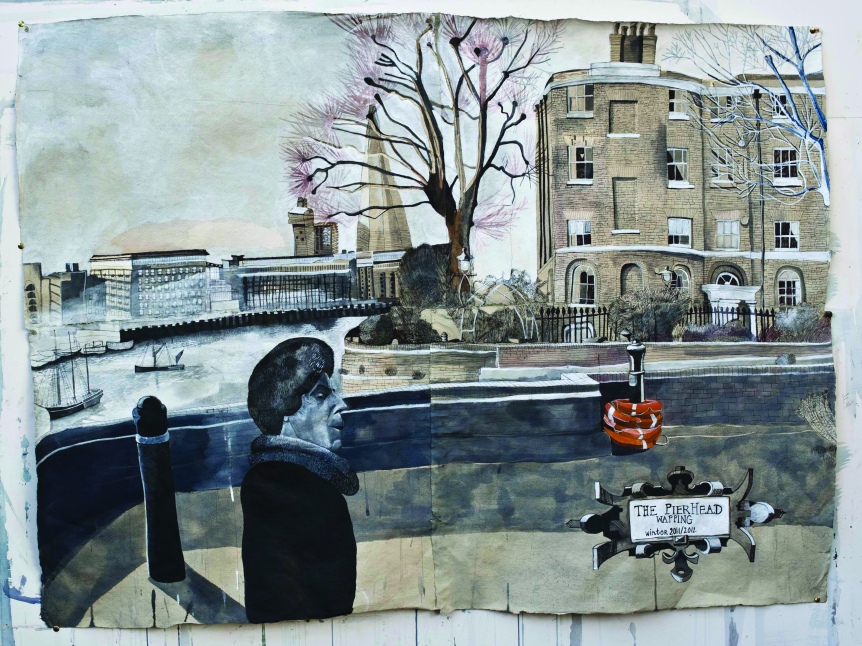 Sophie was one of three Drawing Year Alumni who exhibited recently at the School’s ‘Pretty Gritty City‘ show.

How long ago did you complete The Drawing Year, and how has it influenced your work?

I finished The Drawing Year in 2009.  It reinvigorated my interest in observational drawing and opened up my practice with new subjects and new ways of drawing.  It also introduced me to the drawings of artists which I hadn’t previously looked at.

How was The Drawing Year different from your degree course?

Well, I was older and understood and appreciated the opportunity to have this time to draw was a rare and wonderful thing.  I felt more confident on the drawing year to participate in discussions and conversations about art.  There is definitely more emphasis on teaching on the drawing year than on a degree course and a feeling of belonging to a school of thought .

Are there any particular classes that shaped how you work?

Drawing the clothed figure was important as the tutor Susan Wilson encourages you to use colour in drawings focusing on pattern and texture with colour.  She talked a lot about the power of clothes, putting them in a social/historical/political context and about costume for the stage and using clothes to create character which links directly into my work in the theatre designer. All the classes drawing out in the city were important, as although when I travel abroad I take a sketchbook and draw continuously, I hadn’t applied this practice to London.  So I also discovered a whole new subject matter in the city. 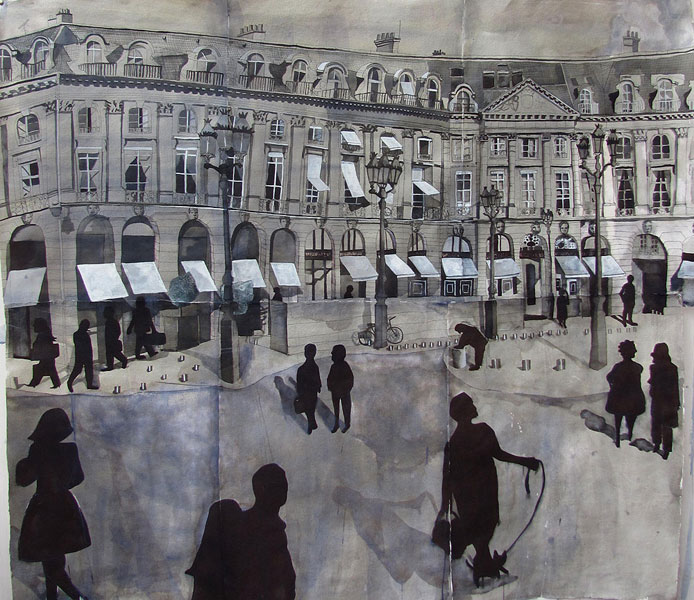 Was there a particular moment in the year when you remember having a breakthrough with your drawing?

When I started The Drawing Year I remember Timothy Hyman saying don’t think too much about how this year relates to your practice, just draw as much as you can and improve.  Which I think was really good advice just to make lots of drawings in different ways.  I feel that most of what I did during the year was pretty rubbish but when I got back into my studio after I’d finished I felt much more confident and connected to my work.

What are the biggest challenges, and how do you prepare for them, of drawing on site in London?

Actually finding what I want to draw is a challenge, as there are so many things going on, it’s difficult to focus in and concentrate on one thing.  I walk around a lot first or go to visit a place just to look without a sketchbook and then return with drawing materials. 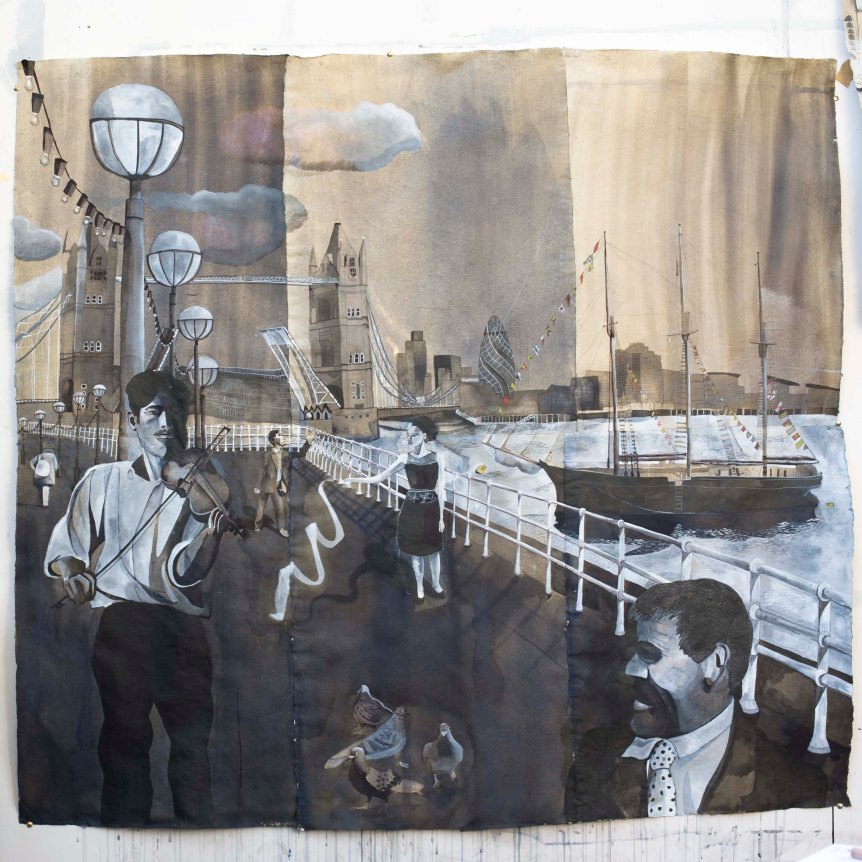 Where do your narratives and characters come from? And do they make re-visits in later work?

They come from my life, stories, memories.  Some are real some invented.  I love the writer W.G. Sebald and the way he weaves together fact and fiction, history and memory. So far characters haven’t revisited my work but they often wait for years in the wings waiting for their moment.

How does drawing in London compare with your drawing/traveling in other cities?

There is definitely a greater urgency to record things when I’m away as time is more finite and I might not get the chance to return.  I love drawing the long shadows and old stone walls of hot countries, India, Morroco, the Middle East. 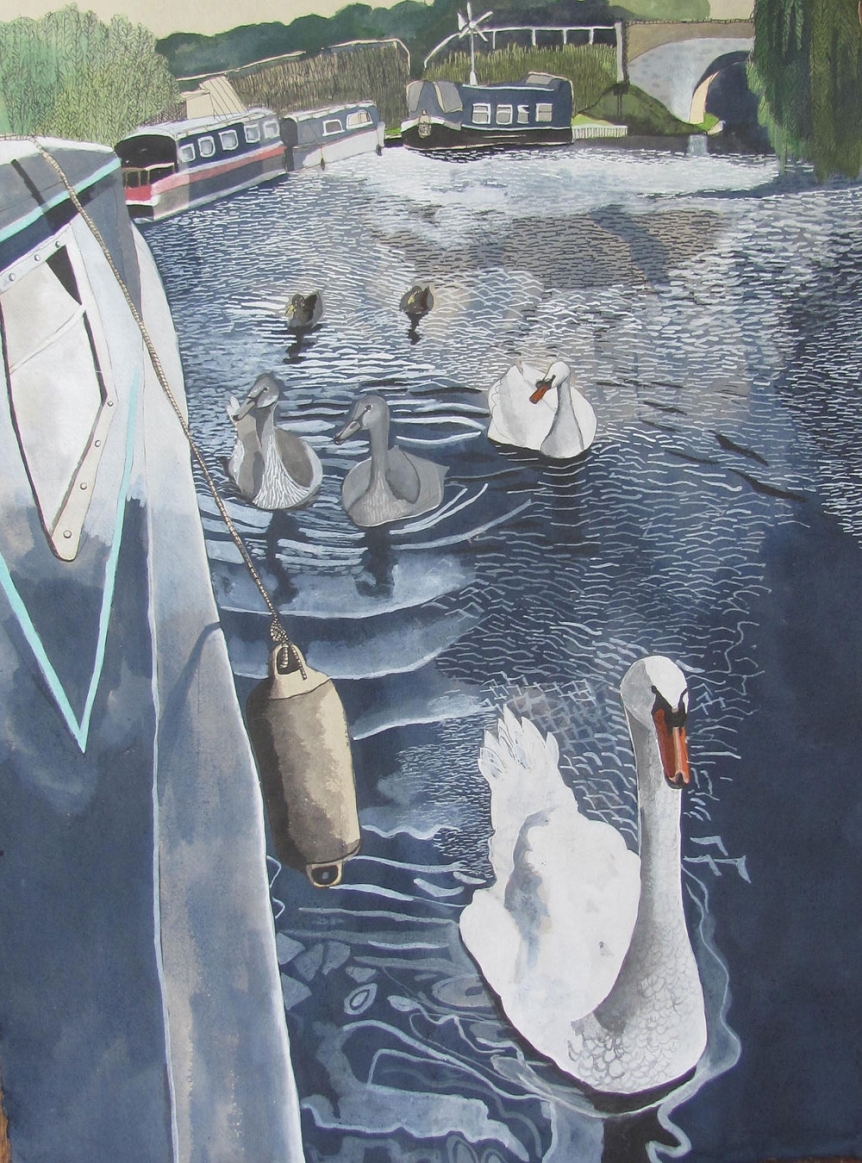 Your work is strongly linked with theatre, do you take a narrative into a drawing or does in unfold in the making process?

I start with quite a strong idea of the elements I want to put together in a drawing and the narrative comes from how those elements work together.  If they don’t work I then start editing, so the piece takes on it’s own life.

Why do you have a particular love of “night drawing”?

I find drawing at night really exciting and challenging.  The city comes to life in a different way and the atmosphere changes.  I respond very much to tone and light and find all the different types of light at night in the city endlessly interesting to draw.

You can see more of Sophie’s art and theatrical work on her website.

Sophie completed a BA Hons in Fine Art Painting at Brighton University and then went to live in Cyprus for a year; where she continued to paint and draw, finding inspiration in village customs, the Byzantine frescoes in the mountain churches, and Greek Orthodox rituals. Her time there culminated with an exhibition at a local gallery. On returning to UK, she joined a studio group on a farm in East Anglia. Surrounded by fields and big skies, her work grew in scale and changed in tone, away from the Mediterranean sun. Here she began collaborating with other artists (running workshops and other studio events) and continued to show her work both inside and outside the UK. After a few years of rural life Sophie moved to North London where she became involved with a friend’s Youth Theatre group and made props and costumes for their productions. These productions were mythical stories reinvented for young people with an emphasis on musical and visual elements. These experiences led her to apply for the wonderful Motley Theatre Design Course on Drury Lane where she completed a postgraduate course in Set and Costume design. Since finishing she has designed many productions, including dance, new writing and pieces of children’s theatre, several of which have toured the world. Theatre and the theatrical also feeds into her drawing and painting both as subject and her interest in light and dark, silhouettes, shadows and special effects. She developed a love of “night drawing” at The Princes Drawing School where she studied on The Drawing Year postgraduate programme in 2009, and thinks London at night is the biggest and most dramatic stage of all.

One thought on “An interview with Sophie Charalambous”